skip to main | skip to sidebar

A trip to the intriguing Scriveners Books in Buxton has instigated a new strand of work. Foraging through 5 floors of old books uncovered various Derbyshire guides and atlases. Carefully selected text and black and white images have been woven into this painting of Wirksworth: 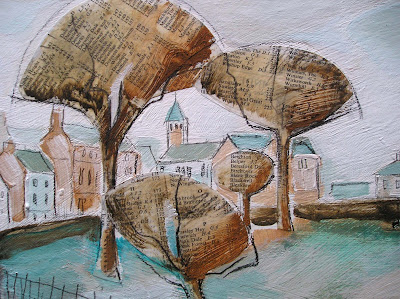 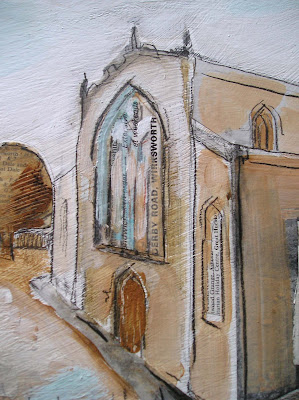 Foraging at Black Rocks uncovered the red earth used in much of this work. Other walkers were fascinated by the sudden emergence of this vivid ochre in the woodland path: 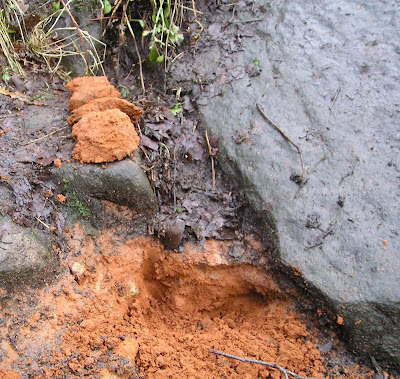 Posted by Lindsey Hambleton at 15:55 No comments:

Historical research on the Portway has led me to information on natural pigments found close to the route, including ochres of such high quality that they were the basis for the colour works in the Cromford area.

In the past, many minerals have been mined and processed in the Peak District, often to make pigments. Lead compounds, all toxic, were used to make red, white and yellow. Zinc oxide was used for white and copper (from Ecton in the western Peak) to make blues and greens. Iron oxides (ochre and 'raddle') mined around Brassington, Cromford and Crich was used for yellows, oranges, browns and reds. Manganese compounds ('wads') from Hopton, Middleton, Cromford and Griffe Grange produced reddish purple, black and rich brown. Sooty types of coal were made into black paint. British Geological Survey

Last weekend, I set out with the Elk to Hopton - I had read that umber can be found in Doglow Wood. As we scaled the hillside, dodging mineshafts, I decided this was our most absurd adventure so far: what were my chances of finding brown umber in a large very brown woodland? Skirting the woodland, we discovered a large overgrown mine 'crater', recently excavated by badgers. In the huge piles of soil were lumps of black/brown material, clearly not soil.... At home that evening my precious finds were met with amused expressions, and mutterings about badger droppings. Finely ground and mixed with linseed oil, the colour is identical to Rowney Raw Umber, but suspended in my paint is adventure and satisfaction.

Careful heating has produced Burnt Umber, and added to the Portway Pigment range are a yellow sandstone from Black Rocks, ground and heated to a red shade; and a red clay from Aleck Low. 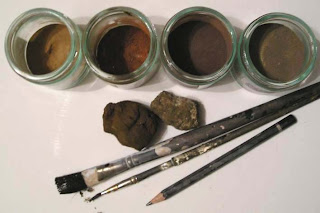 I am expecting a call from Longcliffe Quarry to let me know my ochre is ready for collection, so more paints to be made...... Here are a couple of drawings produced with the umber, sandstone, clay, and a black made from charcoal: 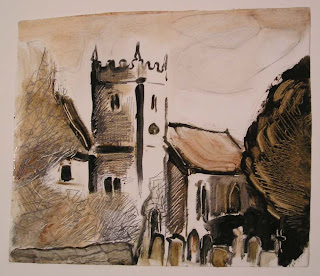 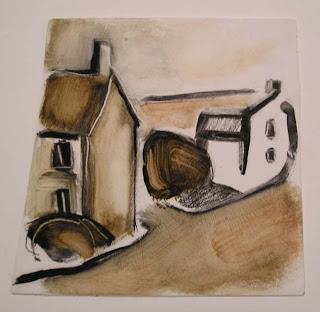 Top: Church of the Holy Trinity, Ashford in the Water, Below: Wardlow
Posted by Lindsey Hambleton at 12:51 No comments:

There are several intriguing churches on the Portway: the humble semi-detached chapel of All Saints at Dale; the elegant spired landmark of St. Matthew's, Morley; the imposing St. Mary's, Wirksworth, where Saxon stones enrich the medieval walls; and the 13th Century Church of Holy Trinity at Ashford in the Water. 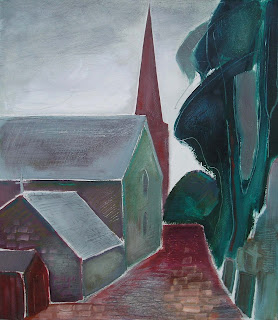 Since Christmas I have been concentrating on the churches, sketching interiors and exteriors. The warm toned study of St. Mary's, Wirksworth reflects the welcome shelter from the freezing fog outside. The larger painting of Morley takes an unusual viewpoint, with flat areas of paint scored, crosshatched and patterned. 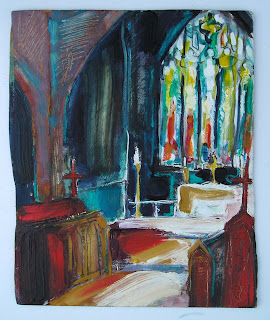 Posted by Lindsey Hambleton at 16:15 No comments: